SEATTLE - The International Pacific Halibut Commission (IPHC) completed the 97th Session of the IPHC Annual Meeting (AM097) on 29 January 2021 with decisions on total mortality limits, fishery limits, fishing period dates, and other fishery regulation changes. A total of 270 individuals attended the meeting via the electronic platform.

Meeting documents, presentations, recordings of the sessions, and the report of the meeting are available on the AM097 meeting page at the IPHC website:  97th Session of the IPHC Annual Meeting (AM097) | IPHC.

IPHC Media Release 2021-005 reported the initial results of AM097. Selected additional elements of the Report of the 97th Session of the IPHC Annual Meeting are highlighted below.

The Commission NOTED the following scientific advice from the IPHC Secretariat:

The Commission NOTED the following outlook for the stock provided by the IPHC Secretariat:

The Commission approved a series of IPHC fishery regulation changes for 2021, including fishery limits and fishing periods. In accordance with the IPHC Convention[1], the fishery regulations approved by the IPHC have been recommended to the Contracting Parties for implementation according to their domestic laws. The complete IPHC Fishery Regulations (2021) approved by the Commission will be published on the IPHC website in the coming days (https://www.iphc.int/the-commission).

The Commission ADOPTED the distributed mortality limits for each Contracting Party, by IPHC Regulatory Area and sector, as provided below:

The Commission ADOPTED fishing periods for 2021 as provided below, thereby superseding the relevant portions of Section 9 of the IPHC Pacific halibut fishery regulations by specifying that commercial fishing for Pacific halibut in all IPHC Regulatory Areas may begin no earlier than 6 March and must cease on 7 December.

The Commission ADOPTED changes to the derby season structure for the IPHC Regulatory Area 2A fishery from openings Monday through Wednesday, to openings Tuesday through Thursday.

The Commission RECOMMENDED that further consultations between Contracting Parties and fishery stakeholders on the administrative and policy implications of a year round fishery would support the decision process for the 98th Session of the IPHC Annual Meeting (AM098; January 2022) on potential further extensions of the direct commercial fishing period.

The Commission NOTED the updated information presented by the IPHC Secretariat on IPHC Regulatory Areas 4B and 2A FISS design, costs and estimated revenues. No further amendments to the 2021 FISS design approved at the 9th Special Session of the Commission (SS09) were made. 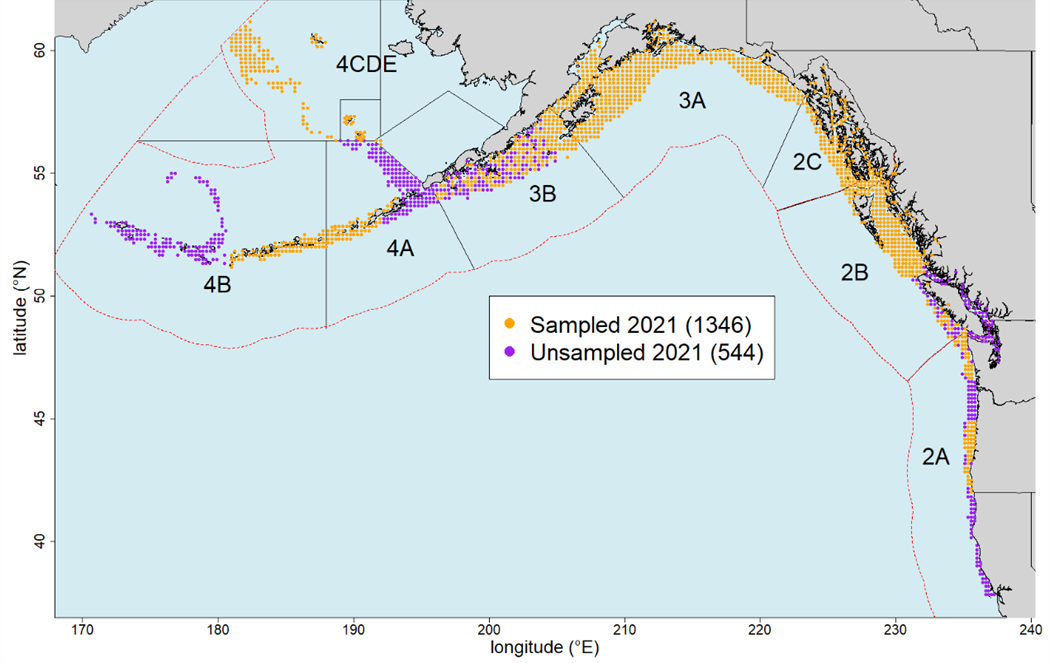 Figure. Optimised ‘minimum 2021 FISS design’ (orange circles) based on randomised sampling in 2B-3B, and a subarea design elsewhere. Purple circles are not planned for sampling in 2021.

Officers of the Commission

For further information please contact the IPHC Secretariat at secretariat@iphc.int or 206.634.1838.

[1] The Convention between Canada and the United States of America for the Preservation of the [Pacific] Halibut Fishery of the Northern Pacific Ocean and Bering Sea.