The Pacific Fishery Management Council manages groundfish fisheries conducted off Washington, Oregon, and California, and the National Marine Fisheries Service implements the policies and enforces the regulations. Historically, Pacific halibut bycatch was believed to be quite low until an analysis by the IPHC in 1998 suggested otherwise. The increased focus on Pacific halibut bycatch and the weakened status of certain groundfish species led to the creation of an observer program in 2001. While better estimates of bycatch were available as a result, the economic health of the groundfish fishery was declining, and little was done to manage Pacific halibut bycatch.

In 2011, a Trawl Rationalization Program, a type of catch share or individual fishing quota program, was implemented for the trawl fishery. Importantly, the program contained requirements for 100% observer coverage and a program for managing Pacific halibut bycatch. Similar to the Canadian system (see IPHC Regulatory Area 2B), an Individual Bycatch Quota (IBQ) program was established in which each trawl vessel was provided a share of a total amount of allowable bycatch. As a consequence, Pacific halibut bycatch dropped substantially, from a peak of 475,000 pounds (287 t) in 2005 to less than 60,000 pounds (36 t) in 2012.

The following table from the 2016 RARA, Chapter 2.6 Incidental Catch of Halibut, shows bycatch mortality by gear type in recent years. 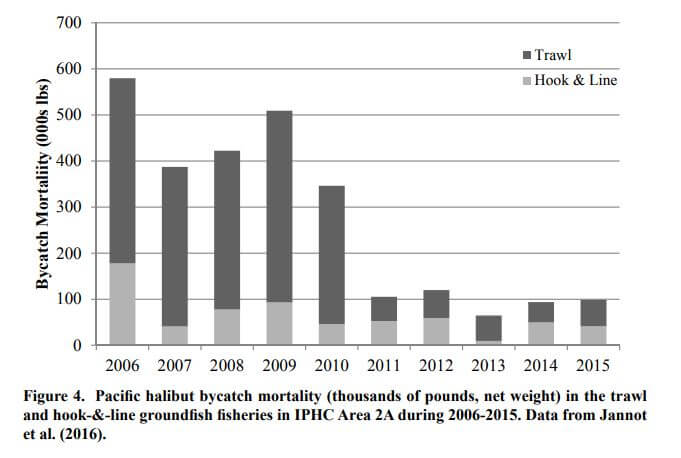