Fisheries and Oceans Canada (DFO) directs policy and management programs concerning bycatch, and implements the policies and enforces the regulations.

To provide further incentive to reach the bycatch goal, in 1996, DFO implemented a groundbreaking system of individual vessel bycatch quotas (IVBQ), along with a 100% mandatory observer program, for bottom trawl vessels in all major groundfish fishing areas. The IVBQ system made individual fishers responsible for their own bycatch, thus providing incentive to minimize their bycatch. Fishers made dramatic changes to fishing operations, primarily through reduced towing time, improved handling of discarded fish, and increased area/time/depth selectivity in their operations. Other measures not directly targeted to Pacific halibut also had an effect, such as increased trawl mesh size, delayed openings, time/area closures originally directed at reducing rockfish bycatch, and a season-long closure of Pacific cod due to conservation concerns. In the end, the trawl fishery reduced its Pacific halibut bycatch mortality from 1.5 million pounds (907 t) in 1995 to approximately 299,000 pounds (181 t) in 1996, well below the 1997 goal. Since that time, bycatch has remained low, ranging from 150,000 to 350,000 pounds (91 to 212 t) annually.

In 2006, DFO implemented the Commercial Groundfish Integrated Pilot Program, which covered all groundfish fisheries, including Pacific halibut. The program sought to address concerns about adequate monitoring, catch reporting, and full accountability of catches. The program was comprised of individual transferable quotas (ITQs) for all species, the ability to retain species which had previously been discarded, a requirement that harvesters acquire quota to cover the mortality of all catch, including discards, and quota transfers between fisheries. The program was refined in the initial years of the pilot period, and became permanent in 2010. Within the Commercial Groundfish Integration Program, Pacific halibut can now be retained in some fisheries where it had been historically discarded, but only if quota was obtained from Pacific halibut IVQ holders. This allows for a fuller and more accurate accounting of Pacific halibut mortality occurring in all fisheries. 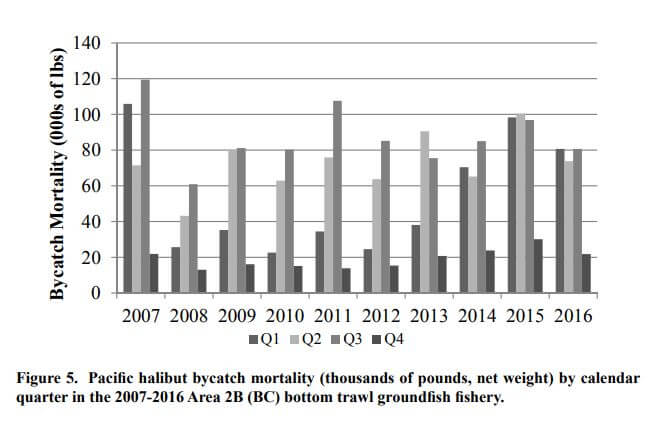