Fishing by foreign fleets continued throughout the 1960s and 1970s, harvesting groundfish and catching substantial amounts of Pacific halibut in the process. With the implementation of extended fisheries jurisdiction in 1977, the catch of groundfish by foreign fleets was slowly curtailed while U.S.A. fishers began developing their ability to harvest groundfish. In response, the NPFMC began increasing the allocations to the domestic fishery and further reducing allocations to the foreign fishery. As this transition occurred, Pacific halibut bycatch reached a record low of 6.1 million pounds (3,689 t) in 1985, although the domestic fishery was not well monitored and bycatch not well estimated. By 1989, the foreign fleet was almost completely phased out of U.S. waters, replaced by a fully domestic fishery in 1990. With a rapidly growing domestic groundfish fleet off Alaska and little bycatch management, incidental catch again rose quickly. Many of the bycatch restrictions that had been placed upon the foreign fleets were not implemented for the domestic groundfish fleet, as they were perceived to be overly restrictive on the developing domestic fishery.

Since 1990, Pacific halibut bycatch management of U.S.A. domestic groundfish fisheries in Alaska has principally been conducted through the use of limits to the annual amount of Pacific halibut bycatch mortality. The limits are specific to selected target fisheries or fishery groups. The limits are divided among seasons and subareas within the Bering Sea and the Gulf of Alaska. Once a limit is reached, all groundfish fishing by that fishery ceases for the remainder of the year. Most fisheries have limits which are split among seasons to better spread the catch over the year. Gear restrictions are another tool used to help make sure that bycatch does not become excessive. For example, one restriction ensures that pelagic trawls are not fishing on-bottom where Pacific halibut bycatch occurs.

The following tables from the 2016 RARA, Chapter 2.6 Incidental Catch of Halibut, show bycatch mortality by gear type in recent years. 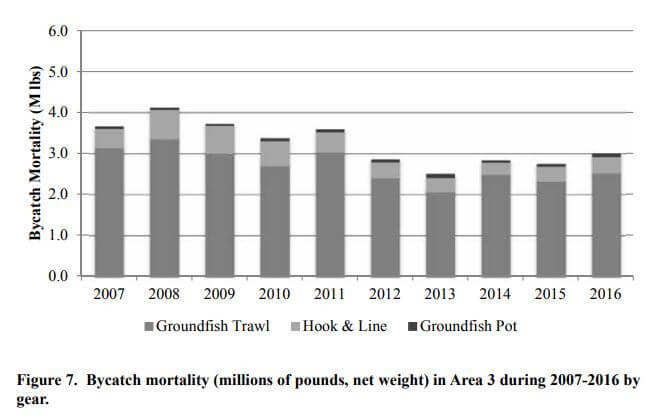 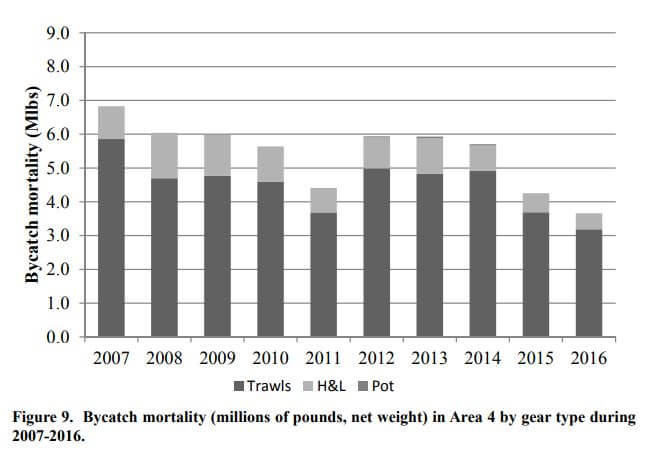