A detailed description of IPHC aging procedures and methods can be found in Forsberg (2001) and is linked below.  A brief summary is presented here. 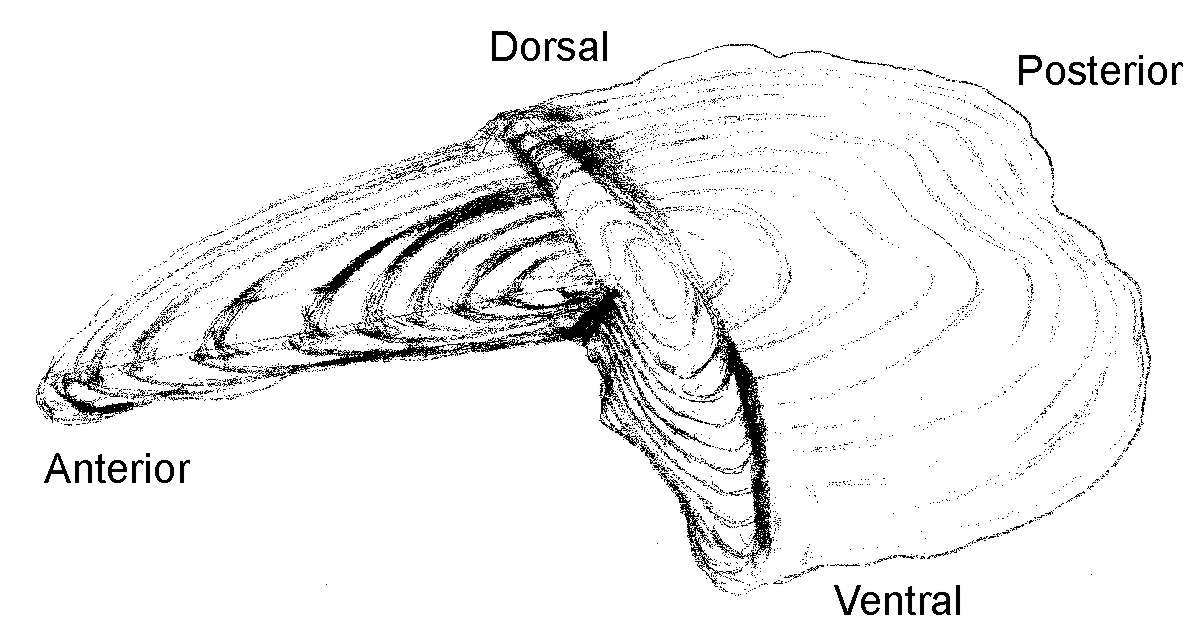 Fig. A: Cross-sections of an otolith

Otoliths, also called ear-bones, are structures made primarily of calcium carbonate that are found in the head of most fish. Otoliths act as sound receptors and also play a role in balance and orientation. As the fish grows, so does the otolith, by deposition of concentric layers of material (Fig. A). Seasonal changes in the fish's growth rate are reflected in the otolith. A year's growth consists of a wider summer zone (reflecting faster growth) and a narrower winter zone (reflecting slower growth). Because halibut spawn in winter, the winter zones are counted to determine the age of the fish in years. These annual growth rings, or "annuli", are similar in appearance to the growth rings of trees. 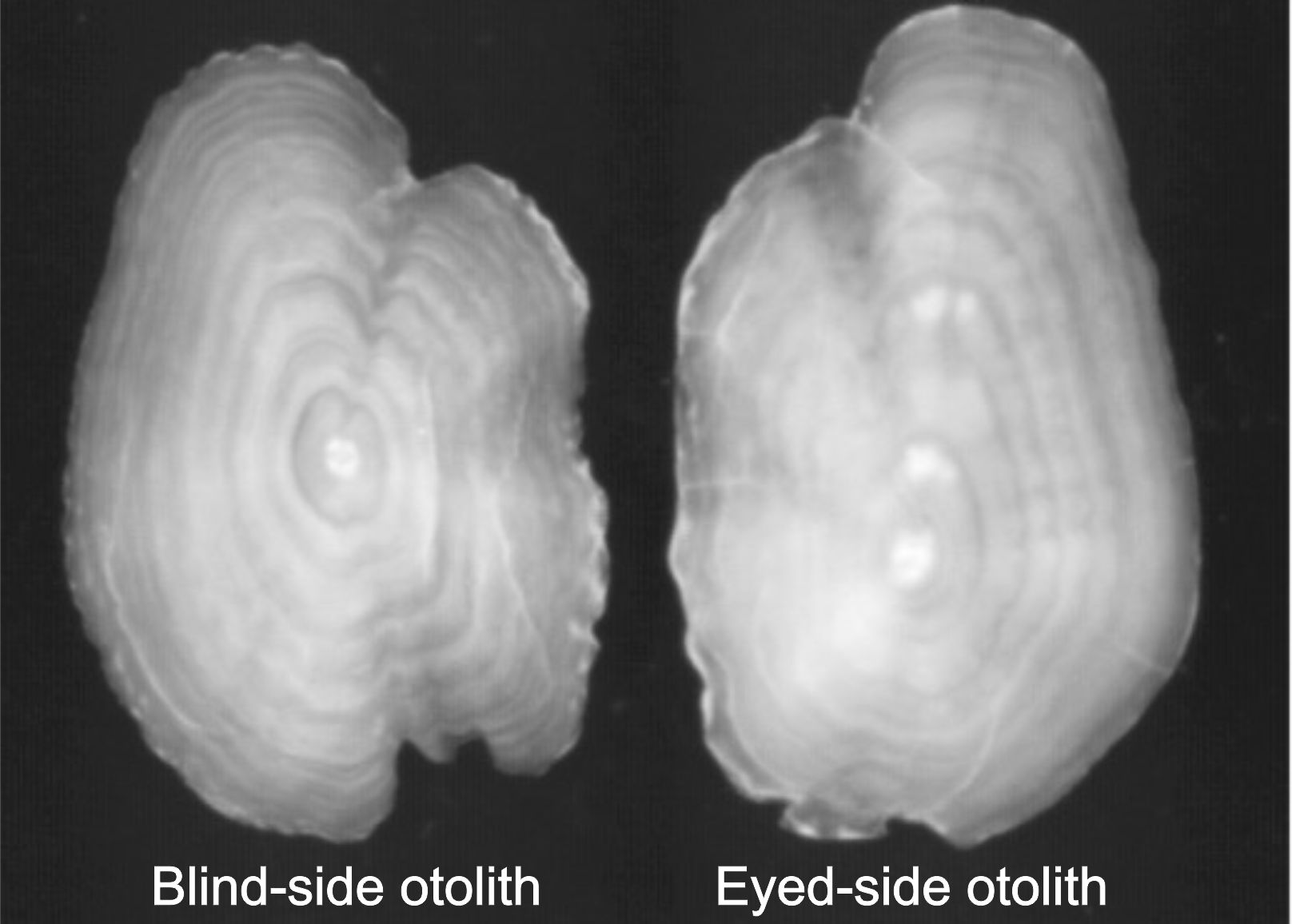 Fig. B: Eyed and blind side otoliths

Pacific halibut actually have six otoliths, three on each side of the head, and the IPHC uses the largest of these called the sagittal otoliths, for aging. Only the blind-side otolith is used for production aging; The eyed- and blind-side otoliths (Fig. B) are not mirror images in Pacific halibut as they are in some species, and the growth patterns on eyed-side otoliths are more difficult to interpret. Pacific halibut otoliths are cleared in 50% glycerin solution for several weeks and then viewed under reflected light using dissecting microscopes at a magnification between 5X and 50X. Aging methods used at the IPHC include the following: 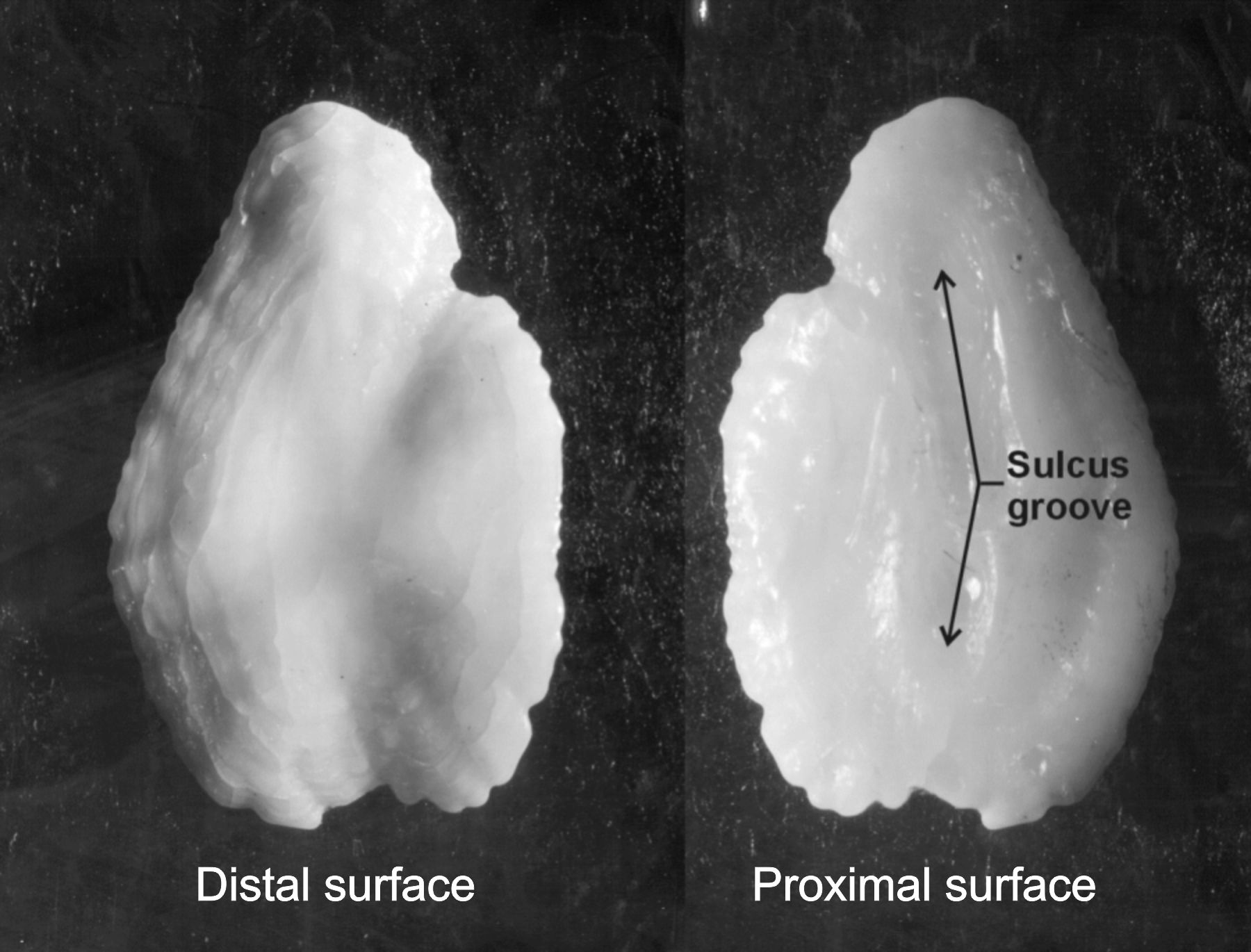 Fig. D: A broken and baked otolith cross-section of an 8-year old fish 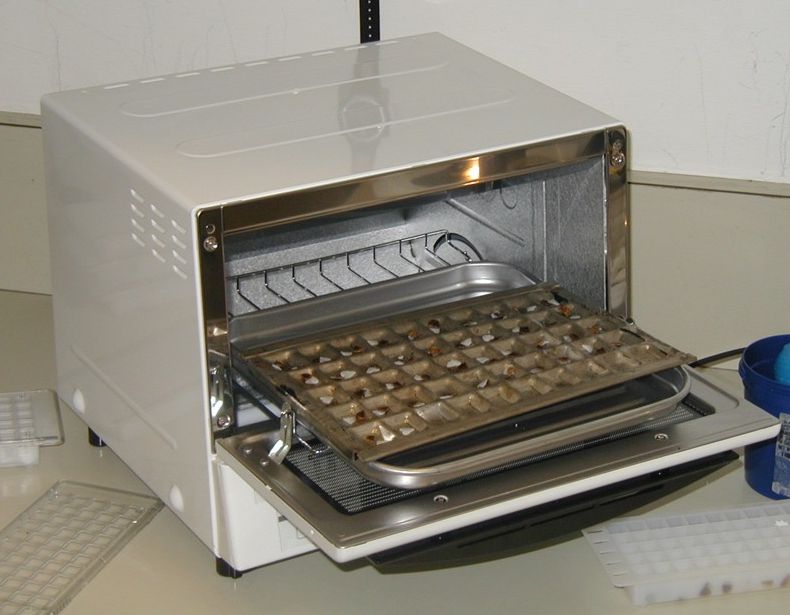 Fig. E: Using a toaster oven to bake several otoliths at a time

Through 2001, Pacific halibut otoliths were all surface aged at IPHC. The criteria used between 1992 and 2001 included performing break-and-burn or break-and-bake age determinations in cases where readers were not confident of the surface age, (e.g., thick/steep edge, opaque or cloudy surface, odd growth pattern, high surface age, etc.). The break-and-burn/bake method of age determination was validated by a bomb radiocarbon study (Piner and Wischniowski 2004) and since 2002, all longline (survey and commercial) and sport-caught halibut are aged by break-and-bake technique. Surface patterns on very young Pacific halibut, commonly caught during the National Marine Fisheries Service groundfish trawl surveys, are clearer and easier to interpret, and yield the same ages as the break-and-bake method for Pacific halibut younger than five years old. Since 2002, if the surface age is five or greater, the otolith is broken and baked. Trawl survey-caught otoliths that are obviously older than five are not surface-aged first.

The oldest age recorded for Pacific halibut is 55 years for both males and females. The 55 year old male had a 118 cm of forklength (~36 lbs, net weight) and was captured in 1992 in the Bering Sea on IPHC's fishery-independent setline survey. The 55 year old female was 161 cm in forklength (about 100 lbs, net weight) and was captured in the Bering Sea in June 2000, also on the IPHC fishery-independent setline survey. The mean age for Pacific halibut sampled from the commercial catch has been 12-13 years for the last several years.

CARE (Committee of Age Reading Experts), composed of otolith readers from the west coast of Canada and the U.S., which meets biennially in Seattle, WA