Genetic techniques find a variety of applications in fish management, such as matching trade names to species (Clarke et al. 2006) and the identification of fish origin (Behrmann et al. 2015) and illegally-harvested product (Nielsen et al. 2011) in market samples; monitoring harvest composition in mixed-stock fisheries (Dann et al. 2009); evaluating effects of habitat fragmentation on population function (Gouskov et al. 2016); and examining relationships between population structure and management units in harvested stocks (Carvalho and Hauser 1994). The latter of these can be broadly termed “population genetics”, a field of research in which the IPHC has been engaged for roughly the last 20 years. The IPHC’s population genetics research has focused on identifying substructure within the population as context for evaluating the degree to such structure is reflected in the spatial aspects of stock (e.g., in defining the regions over which target exploitation rates vary, or within which spawning stock biomass is estimated).

Population genetics research in Pacific halibut can be viewed as having occurred within three eras during which different genetic techniques were employed: 1) the 1960s through the 1980s, using allozyme markers; 2) from the 1990s through 2015, using nuclear microsatellites; 3) current research, as we move towards advanced genome sequencing.

The use of allozymes to detect genetic differences within and among populations is an attractive approach due its simplicity, speed, and relatively low cost. Allozymes are the various forms of each individual enzyme – molecules that regulate the speed at which chemical reactions occur within the body – that result from variations that occur among individuals in the nature of the genes that are responsible for defining those enzymes. In many cases, the allozymes are different sizes, or possess different electrical charges, such that when placed in a gel and subjected to an electrical field (i.e., undergo electrophoresis) they will travel through the gel at different rates. Thus, by purifying the selected enzymes for each individual and conducting electrophoresis on the products, bands will eventually appear within the gel, each representing an allozyme. The result is a bar code, of sorts, that characterizes the individual’s enzyme profile. By comparing these profiles among individuals and regions, degrees of relatedness and population structure can be examined.

At the IPHC, allozyme research (Grant et al. 1984) was conducted in collaboration with the US National Marine Fisheries Service (NMFS) and represents the foundation upon which subsequent IPHC population genetics research has rested. The work analyzed allozyme frequencies from juvenile halibut collected in three regions – the Gulf of Alaska, southeast Bering Sea, and the Sea of Japan – employing a suite of 35 enzymes. Allozymes of five of the enzymes demonstrated sufficient variation to be useful for population analysis and significant genetic structure was revealed. The samples from the Gulf of Alaska and Bering Sea were not found to be significantly different, validating earlier analyses (Tsuyuki et al. 1969) that also found little differentiation among locations in the eastern Pacific. However, the eastern Pacific samples were found to differ from those collected in Japan. This provided the first evidence that a significant break likely occurs in Pacific halibut population function, somewhere between the eastern and western Pacific.

Microsatellites are regions within the genetic code that lie between “coding regions” (i.e., the regions that contain genes) and are composed of repetitive sequences of DNA. Because they typically do not code for protein production, they are free to occur in nearly any size (although, once large enough they are referred to as either “minisatellites” or “macrosatellites”, depending upon repeat-length) without negatively impacting the organism’s function, and are therefore often subject to high mutation rates. This can make them highly variable within a population and allow for isolated geographic areas within a population to develop unique genetic signatures over shorter periods of time than may be required for other regions of the genome to differentiate.

The IPHC’s first microsatellite-based genetic research (Bentzen et al. 1999) examined differences in the genetic diversity of fish collected off Oregon, in the central Gulf of Alaska, and the Russian Sea of Okhotsk, using three microsatellite loci. Similar to the earlier allozyme studies, no differences could be detected within the eastern Pacific, but samples from the western Pacific displayed significant differences from the North American stock. Still, the authors cautioned that failure to detect differences within the eastern Pacific may have been due to sampling bias: in particular, each region was sampled in summer whereas Pacific halibut are known for their potential to migrate long distances between their summer feeding grounds and winter spawning areas. As such, genetically-distinct breeding groups could mingle on common feeding grounds, rendering it impossible to detect differences among groups from summer samples.

Considering this, in 2003 the IPHC embarked upon the most comprehensive population genetic survey yet conducted for the species, with specific attention to collecting samples on spawning grounds, during winter. From 2003 through 2007, samples were obtained from eight locations stretching from British Columbia to the southeast Bering Sea shelf edge, and west to Attu Island in the western Aleutian Islands; to this were added many of the Russian samples that had been collected for Bentzen’s (1999) study, and samples that had been collected during the winter of 1998-1999 in British Columbia and the central Gulf of Alaska. In total, 821 individuals were genotyped using 61 microsatellite loci. The results obtained suggested that while there continues to be little evidence of population structure along the coast of the North American continent, differentiation was detected on a westward axis along the Aleutian Island Chain. Specifically, there appeared to be a subtle break in population structure to the west of Amchitka Pass, such that Western Aleutian halibut may be distinct from the remainder of the eastern Pacific; and perhaps to an even greater degree than are Pacific halibut in the Sea of Okhotsk (Drinan et al. 2016). 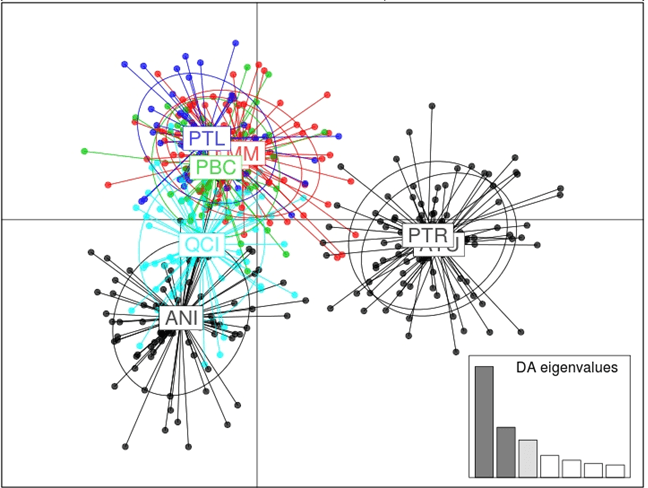 However, whereas the majority of the samples were collected during the spawning season, the samples from the western Aleutian Islands were not. The Aleutian Islands are challenging to fish in the best of weather, and attempts to secure vessels to conduct sampling westward of Amchitka, in January, were unsuccessful. It is highly unlikely that using summer-collected samples in the western Aleutian Islands could have resulted in a spurious genetic signal suggestive of isolation. Rather, using samples that are collected outside the spawning season is expected to have the opposite effect, causing population segments that are reproductively isolated to become mixed with neighboring groups such that they can no longer be identified as unique. Still, the question deserves greater attention and plans are under way to examine the region more closely.

Given rapid advancements in genetic technology over the last decade or so, the speed associated with conducting whole-genome sequencing has greatly increased while at the same time costs have declined. The development of Restriction-site Associated DNA sequencing (RADseq; Davey and Blaxter 2010) allows for rapid sequencing of multiple individuals in simultaneous runs, resulting in the production of millions of short DNA fragments that can later be compared among individuals to identify single nucleotide polymorphisms (SNPs) for genetic analyses. The emergence and availability of affordable full genome sequencing techniques, producing sufficient genome sequences that can be assembled into large segments of the genome (contigs and scaffolds), promises substantial power for isolating functional genes and for identifying genetic diversity and population structure. For more information regarding genome sequencing projects at IPHC, please see the following pages: