Because Pacific halibut harvested in the directed longline fishery must be eviscerated (dressed) at sea, the sex of these fish cannot be determined when the fish are landed. Uncertainty regarding the sex of these fish generates one of the largest sensitivities within the current Pacific halibut stock assessment, yielding variability around estimates of total female spawning biomass. In order for female spawning biomass to be calculated, sex ratios must be estimated. This can be accomplished on the basis of size and age, considering that large young Pacific halibut possess a high probability of being female and small old Pacific halibut a high probability of being male. Any extension, at any combination of length and age the probability of a Pacific halibut’s sex may be calculated and these probabilities can then be applied to unsexed age samples in order to estimate their sex composition (Clark 2004). However, this estimator relies on characteristics of survey catch – the only sets of fish for which sex is consistently known – and the dynamics of the Pacific halibut fishery can differ from those of the IPHC’s fishery-independent setline survey (FISS). For example, the FISS spans only ~40% of the commercial fishing period, whereas seasonal migration has the potential to strongly influence the redistribution of Pacific halibut biomass (Leaman et al. 2002, Loher and Blood 2009). The fishery may also target specific stock components or geographic areas, generating an unknown degree of bias in commercial landings composition relative to FISS catches.

In the absence of direct observations of sex-ratio, the 2013 stock assessment was found to be quite sensitive to the assumption that relative selectivity-at-age for the oldest males and females was equivalent in the setline survey and commercial fishery (Stewart and Martell 2014). 20% range in fishery selectivity sex-ratio was found to translate into a range of female spawning biomass estimates that equaled about 25% of the estimated total spawning biomass; that is, roughly 50 million pounds (22,680 metric tons) of variance. Renewed exploration of the assessment suggests similar sensitivity despite several additional years of data and model improvements (Stewart and Hicks 2017). Without direct observations of the sex of commercially-harvested Pacific halibut it is not possible to determine the magnitude of this uncertainty and/or bias in spawning stock estimates.

As such, the IPHC initiated a sampling program in 2014 to introduce at-sea sex-marking into the directed Pacific halibut fishery. Retained catch would be routinely marked by commercial fishers as either male or female during the dressing process and those marks would be recorded by IPHC port samplers as they collect length data and otoliths for aging. Such a program would be conceptually similar to that which is used in Atlantic lobster (Homarus americanus) fisheries in which fishers “V-notch” the tails of all egg-bearing females before releasing them (Acheson and Gardner 2011). The program was designed to be completed in stages over a five-year period, culminating in the acquisition of sex data in routine port sampling beginning in 2019, as follows:

At-sea sex-marking methods were developed and tested in 2014 by IPHC student intern Orion McCarthy, in a dual-phase study that began in the Alaskan ports of Homer and Dutch Harbor and was completed during the IPHC FISS aboard the F/V Kema Sue. The objective of McCarthy’s work was to develop a method that would be easy for fishers to accomplish while dressing their catch, would not damage their catch from a commercial perspective, and would allow our port samplers to easily and accurately distinguish between marks. Nine marks were initially tested and two eventually chosen based on testing and feedback from commercial longline crew. The two marks that were chosen were as follows: for females, two cuts made in the dorsal (upper) fin; for males, a single cut through the white-side gill plate. The results of the work demonstrated that an at-sea sex-marking program had promise for providing sex-ratio data at the resolution required for assessment purposes. For additional details regarding this project component, please see McCarthy (2015).

Marks used to distinguish the sex of Pacific halibut during dressing: two parallel cuts in the dorsal fin for females; one cut in the white-side operculum for males.

During April and May of 2015, the IPHC’s Homer port sampler, Jessica Marx, enlisted the cooperation of two vessels in the local fleet to conduct a voluntary field test of the marking method described above. Sex markings to accompany age and length data were obtained from 228 Pacific halibut representing five offloads. For each of these offloads, the crew marked all of their catch, but somewhat fewer total samples were obtained because IPHC port-sampling protocols stipulate that not all fish from a given offload are to be sampled for age and length. Feedback from the skippers and crew of the vessels regarding the ease of the process was positive, and a summary analysis of the sex ratio in their catches further highlighted the importance of collecting these data. Although the sample was relatively small, the data suggested that the vessels encountered a much higher proportion of female Pacific halibut across commonly-encountered ages than our FISS data would have predicted based on similar sample sizes. This was most pronounced for halibut age 9-13, over all landed sizes. Whereas random samples of equivalent sample size and over the same age classes taken from the IPHC’s Regulatory Area 3A setline survey catches were found to be 60-70% female, the commercial samples were more than 90% female. 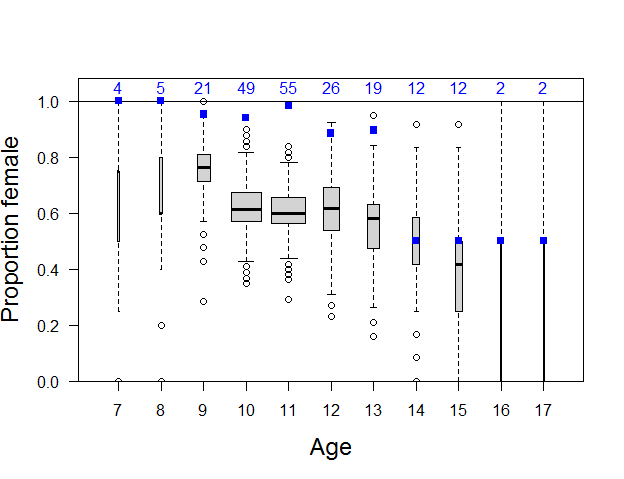 Based on voluntary at-sea sex marking of commercially-harvested Pacific halibut (n = 207) landed in Homer, Alaska in 2015, proportions of female Pacific halibut at-age within those landings (small blue squares) relative to what would have been expected from similar samples sizes based on results of the IPHC fishery-independent setline survey (box and whisker plots). In the box and whisker plots, the horizontal lines indicate the median values; the gray boxes contains the central 50% of expected values around those medians; the dashed line the 95% interval; and the dots beyond the expected variation indicate unlikely-yet-possible “outlier” values. Sample sizes by age are denoted in the top margin. Note that for Pacific halibut <14 years of age, the sampled commercial trips were composed of considerably more females than we would have expected.

Over the course of the 2016 commercial longline season, 28 sex-marked landings were sampled representing just over 16% of the total number of landings and individual Pacific halibut sampled in Canadian waters, and ~13% of those landings’ total weight.  These samples represent just under 4% of 2B’s 7.3 million pound (3,311 metric ton) catch limit. Feedback from participants in the program indicated that marking was not disruptive of normal fishing activity, nor did it have any adverse effects on marketability of these fish. Analysis of the sex data produced similar conclusions as had been observed in 2015, but over a larger sample: vessels appeared to encounter a higher proportion of females than survey data would have predicted.

In 2017 the voluntary at-sea sex-marking program was increased in scope to include all IPHC-sampled ports in all regulatory areas: St. Paul Island, Dutch Harbor, Kodiak, Homer, Seward, Juneau, Sitka, and Petersburg, Alaska; Prince Rupert, Port Hardy, and Vancouver, British Columbia; and Bellingham and Newport, Washington. This effort includes a coastwide incentive program consisting of distributing hats for all participants in the program and a lottery-style drawing for jackets will occur at the end of the season.  Following the completion of the season, tissue (fin clip) samples that were collected in all ports will be assayed to determine sex ratios and will be compared to the at-sea sex-marking data. Subsequently, a determination will be made regarding the relative strengths and limitations of maintaining routine at-sea sex-marking relative to broadscale market tissue collection and laboratory assays.

Assay development was completed in 2017. For more information regarding this effort, please see: Genetic markers (SNPs) for sex identification