Discard mortality rates (DMRs) are estimates of the proportion of incidentally captured Pacific halibut (by both directed and non-directed fisheries) that do not survive after being returned to the water. The magnitude of discard mortality varies according to both the capture and release methods. In general, capture of Pacific halibut by trawl fisheries inflicts greater injury than capture by longline or pot gears. Trawl-induced injuries arise from a variety of sources: compression and hemorrhaging of the fish in the codend of the trawl associated with the weight of the target species; clogging of the gills with sand, mud or sponges as the trawl net is dragged across the sea floor; lacerations from spines or carapaces of species also caught in the net; and, abrasions from debris or the scales of other species (e.g., sharks).

Longline and pot gear capture methods can result in fewer injuries and, in general, better fish condition at release. However, this is not always the case, especially concerning release from longline gear in cases where prescribed careful release methods are not practiced. Longline-capture injuries can occur in the form of torn jaws, cheeks, facial areas, eyes, or gills arising from hook removal; gaff wounds associated with hook removal; and, amphipod predation while on the hook. Pot-capture injuries are primarily associated with interactions of Pacific halibut with other species in the pot (e.g., lacerations and abrasions as a result of contact with other species).

The mortality associated with discarding Pacific halibut in both the directed and non-directed fisheries is estimated annually (utilizing data from multiple agencies, including the IPHC) and incorporated into the Pacific halibut stock assessment and management decisions.

Physical injuries incurred during capture and removal from the hook are used to categorize the severity of injury to Pacific halibut. When combined with observations on muscle tone, bleeding, and sand flea intrusion these assessments can be used to predict the likelihood of survival post release. Different release techniques (careful shaking, hook straightening, gangion cutting, and hook stripping) result in different injury profiles, and therefore different effective DMRs by release method. Understanding the influence of physiological responses to these injuries will better help in the development of best practices to increase survival of Pacific halibut that are captured and released.

Many studies looking at the survival of Pacific halibut after capture events have been conducted over the years. The two main methodologies have been captive holding experiments, and long-term tag returns by injury classifications. 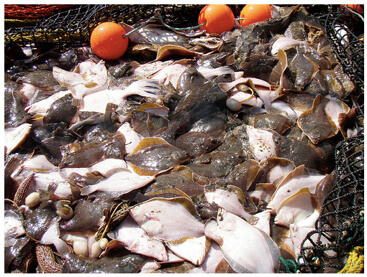