Migration is one of the most fundamental processes governing the structure and function of animal populations and its understanding represents a critical foundation upon which sound fishery management is based. The IPHC’s first Scientific Report (in 1930) identified the most critical aspects of Pacific halibut research to be the investigation of “rates of growth according to locality, the migrations, the “races” existent, and spawning habits”; a suite of processes that are all ultimately influenced by migration to different extents. In its most basic form – defined simply as the directed movement of an organism from one location to another – it can be seen that each Pacific halibut begins a lifetime of migrations as early as the egg stage prior to hatching and continues to conduct migrations at various spatial and temporal scales often until its death. These begin with the predictable movement of fertilized eggs through the water column as they develop, governed by their changing buoyancy; followed by daily feeding migrations that are conducted as larvae, between food-rich surface waters and safer havens at depth; to the transport of larvae from the offshore waters in which they are spawned to the shallow coastal habitat where they settle to their bottom-dwelling existence. As juveniles, Pacific halibut conduct potentially large-scale migrations from nearshore nursery grounds to the continental shelf habitats in which they will reside as adults. Finally, as adults, Pacific halibut undergo annual spawning migrations that take them up and down the continental slope, between shallow feeding grounds and deeper spawning habitat, as well as sometimes-large annual migrations along the coastline.

Historically, while recognizing the importance that migration played in regulating fisheries in both Canada and southeast Alaska, tagging studies comprised the first experimental research that was initiated by the IPHC in 1925. In the more than 90 years since those first Pacific halibut were tagged, the IPHC has marked nearly 465,000 fish with tags that have ranged from simple labelled wire tags; to miniaturized implantable tags containing an electronically-activated individual code (PIT tags); to computerized archival tags that can record millions of lines of data per year while attached externally to the halibut and that automatically detach from the fish at a pre-programmed date to rise to the ocean surface and communicate with passing satellites. In recent decades, studies of migration and dispersal have been expanded to investigate the use of “natural tags” such as regionally-distinct chemical signatures that develop within each fish’s otoliths (ear bones) as they grow, individually-unique coloration of the tail and body, and advancements in genetic identification techniques. Taken together, the IPHC’s suite of migration research seeks to expand our understanding of movement throughout the life cycle of the Pacific halibut while dovetailing with research on the basic aspects of biology and fishery management that migration affects and is affected by: feeding, growth, reproduction, and mortality; changes in stock distribution, productivity, and standing biomass.

The pages contained in this section of our website will guide you through the IPHC’s current understanding of migration and ongoing research, highlighting the primary life-history stages (i.e., larval, juvenile, and adult) and how each stage is being studied through various techniques and analyses. 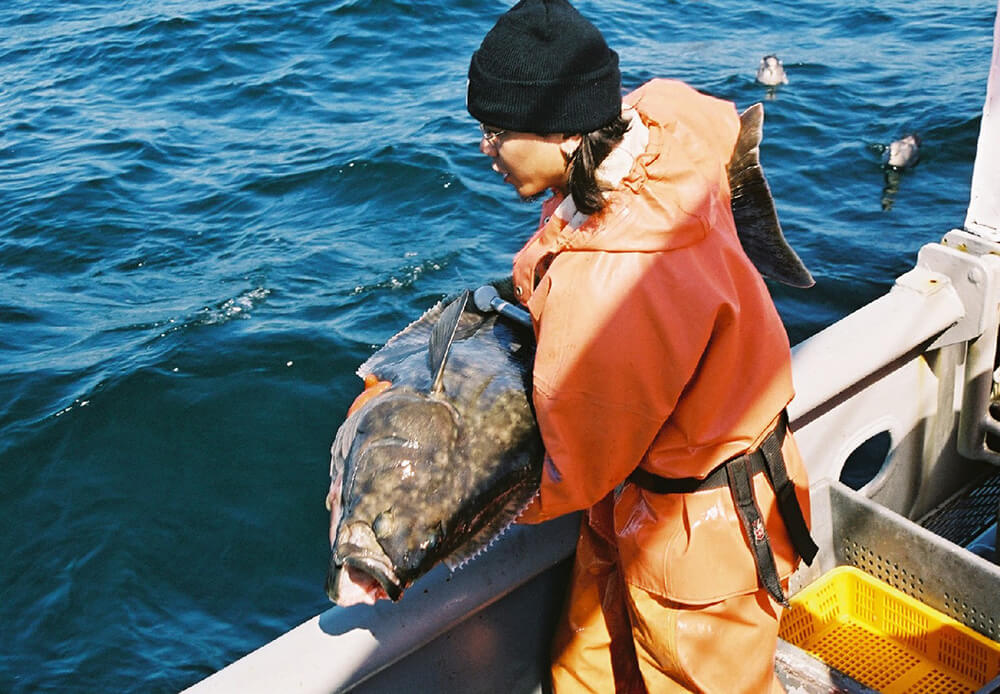 Juvenile migration summarized via information from NMFS, IPHC, and more.

Migration studies have been a key in IPHC research since the 1920s.

A reward of a hat or $10 is offered for most recovered IPHC tags.