Once spawned, Pacific halibut embryos and larvae spend an estimated six months as pelagic organisms before taking on the adult form and settling to the bottom (IPHC 2014). During those first six months, a larval Pacific halibut is highly vulnerable to predation, and is dependent on favorable environmental conditions, as well as availability of prey once the yolk sac has been fully absorbed at about two months of age. During this life stage, the larvae are transported by the prevailing ocean currents away from the spawning grounds, westward in the Gulf of Alaska (GOA), and north and northwestward in the Bering Sea (Fig. 1). Ultimately, the successful larvae are transported inshore for settlement in shallow nursery areas. Pacific halibut are also found off of the coasts of Japan and Russia, but the IPHC does not manage that component of the stock and they are not discussed here. 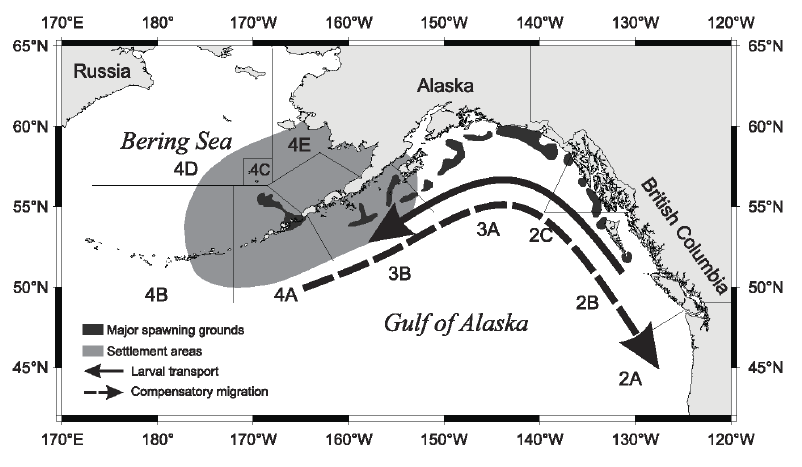 Over a period of several years in the late 1920s to the early 1930s, the IPHC (then known as the International Fisheries Commission) surveyed the GOA and found that Pacific halibut embryos occurred in large numbers in the central and western GOA, in moderate numbers off Haida Gwaii (formerly Queen Charlotte Is.), and in very small numbers in the eastern GOA (Fig. 2). Larval Pacific halibut were found in decreasing numbers as they passed through the various larval stages, suggesting wide-spread mortality and dispersal as the larvae developed (Thompson and Van Cleve, 1936). 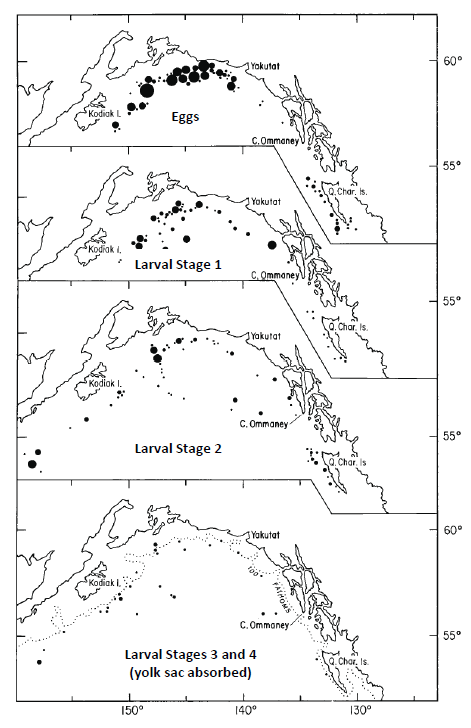 Figure 2. Distribution of Pacific halibut embryos and larvae as reported by Thompson and Van Cleve (1936) and reproduced in Skud (1977).

Since the early 1980s, Pacific halibut larval occurrence data have been collected by the National Oceanic and Atmospheric Administration (NOAA) during ichthyoplankton surveys. These surveys span the GOA, and the Bering Sea/Aleutian Islands (in U.S. waters), but do not include British Columbian waters. Larval Pacific halibut have been found primarily in the central and western GOA, and southern Bering Sea edge, and to a lesser extent, further north and west in the Bering Sea (Fig. 3). Earlier stage larvae that have not yet fully consumed their yolk sac tend to occur at depths several hundred meters deep and off shore. Once the yolk sac has been consumed, the larvae must feed. Larval Pacific halibut at this age are able to manipulate their vertical position in the water column and are found closer to the surface where other planktonic organisms are found. 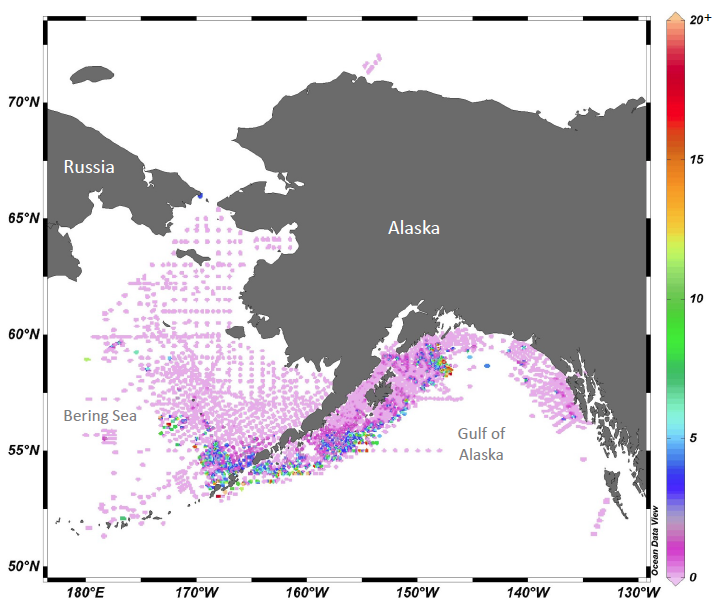 Although it was once thought that there were multiple distinct and separate stocks of Pacific halibut within the IPHC’s management jurisdiction (Thompson and Van Cleve, 1936), it has since become clear that larvae can be transported hundreds of miles during the six month pelagic phase and mixing is inevitable (Skud 1977). The population connectivity aspect of the GOA and Bering Sea through larval drift is the subject of ongoing investigation at the IPHC in partnership with NOAA.