Since the International Pacific Halibut Commission (IPHC) began tagging in 1925, over 465,000 tagged Pacific halibut have been released and more than 51,000 of these releases have been recovered. Pacific halibut are tagged to study migration, age, growth, and mortality. A reward is offered for most recovered tags released by the IPHC.

Most of IPHC’s tagging experiments have been conducted in the summer and most of the recoveries have also occurred during the summer when commercial fishing for Pacific halibut is usually heaviest. Although extensive summer to summer movements have been recorded, most recoveries take place within 60 miles (97 kilometers) of the release area. Data from tagging experiments in which Pacific halibut were tagged or recovered in the winter are limited, but the results show that summer to winter movements are more extensive for adult Pacific halibut than those between summers and that the predominant direction of movement between mark and recapture may differ substantially depending upon the season in which the fish was tagged.

The distance and direction of the migrations also differs with the size and age of the fish. Emigration has been observed from all regions, but few recoveries of adult Pacific halibut released in the Gulf of Alaska have been made in the Bering Sea. Pacific halibut occasionally migrate great distances and several tags have been recovered over 2,000 miles (3,219 kilometers) from their point of release. The longest recorded migration was from a fish released near Atka Island in 1967 and recovered 2,500 miles (4,023 kilometers) south, near Coos Bay, Oregon in 1972. Another Pacific halibut tagged off Newport, Oregon in 1989 was recovered just five months later near Cape Spencer in southeast Alaska. This fish traveled over 5.5 miles (9 kilometers) a day to make the journey. Although tagging studies have shown that coastal migrations of hundreds of miles occur, adult Pacific halibut tend to return to the same feeding grounds each year. To date, the longest time at liberty for a tagged Pacific halibut is 22 years—for a fish that was 56 cm when tagged in 1984. Unfortunately, there was no biological or capture information available for the recovery (sometimes wire tags are recovered after processing and there is no way to match the tag to the fish or delivery vessel).

Young Pacific halibut, those fish that are under seven years old, also migrate long distances, apparently counterbalancing the northwesterly ocean current-driven drift of the eggs and larvae. These post-settlement juvenile and adult movements result in the net migrations of an easterly and southerly direction in the Gulf of Alaska. This complex pattern of movements indicates that the Pacific halibut stock is interrelated and that intermingling is extensive.

The IPHC has deployed a variety of tag types over the years, from simple metal straps or plastic-coated wire opercular tags to complex satellite and electronic archival tags capable of collecting and storing a variety of data. Almost all tags have been applied to the head on the eyed side, but some tags have been applied to different parts of the body, including the dorsal musculature, body cavity, tail, and near the corner of the mouth on the blind side.  Descriptions of older tagging studies are summarized in Kaimmer 2000 and Trumble et al. 1990.

Some of the more-recent tag types used in IPHC experiments are outlined below.

Electronic archival tags can collect and store data on temperature, depth, body position (pitch and roll sensor) and/or light levels. These tags are either internally implanted in the abdominal cavity or attached to the fish externally. Additionally, some archival tag types can transmit the stored data without being physically recovered, while other types must be removed from the fish for the tag data to be downloaded. The IPHC has used both types of archival tag. Most of the archival tags released by the IPHC are pop-up satellite transmitting archival tags (PAT tags). 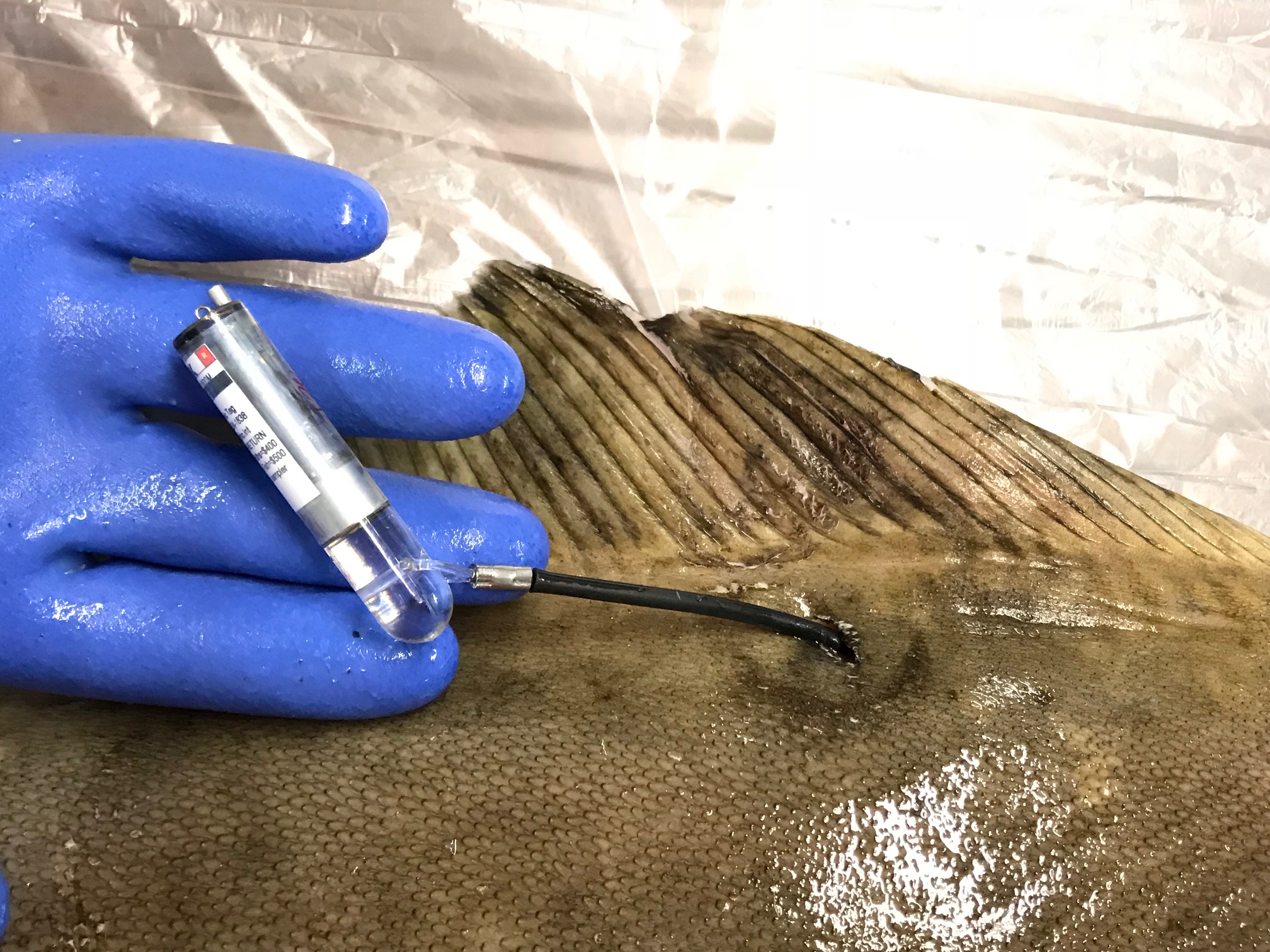 Data can be retrieved without physically recovering the PAT tag; however, far more data can be obtained if the tag is recovered than the tag is able to broadcast via satellite. This is true whether the tag is recovered while still attached to the fish, or found on the beach at some point – potentially even years – after detaching from the fish. PAT tags are attached to the fish’s dark side using a dart and tether arrangement. The PAT tag is attached to the tether with a pin that releases on a pre-programmed date, at which point the buoyant tag body floats to the surface where it transmits its location and accumulated data to a satellite. The IPHC has conducted a number of experiments utilizing PAT tags, and since 2002 nearly 700 Pacific halibut have been tagged with PAT tags. Most of these experiments were designed to look at movement: timing and duration of seasonal spawning migrations, dispersal, and site fidelity for summer feeding grounds (Loher 2008; Loher and Blood 2008; Loher and Seitz 2006, 2008; Seitz et al. 2007, 2008, and 2016). PAT tags can also be configured to measure acceleration, which can in turn be interpreted as evidence of swimming and, therefore, fish survival (Nielsen et al. 2018); these tags are referred to as “survivorship” PATs or “s-PATs”. In 2016, the IPHC was part of a collaborative effort to investigate discard mortality rates (DMRs) of trawl-caught Pacific halibut in the Bering Sea following expedited release using 180 s-PAT tags. An additional 79 Pacific halibut were tagged with s-PAT tags in 2017 as part of a large study, funded in part by the Saltonstall-Kennedy Grant Program NOAA, to evaluate longline discard mortality.

The IPHC has used plastic-coated wire tags (also referred to as “wire tags” or “cheek tags”) for more than 50 years. Plastic-coated wire tags are applied to the eyed-side operculum. A hole that passes under the preopercular bone is made with a tagging needle, and the tag is inserted through the hole and twisted into a loop around the preopercular bone. 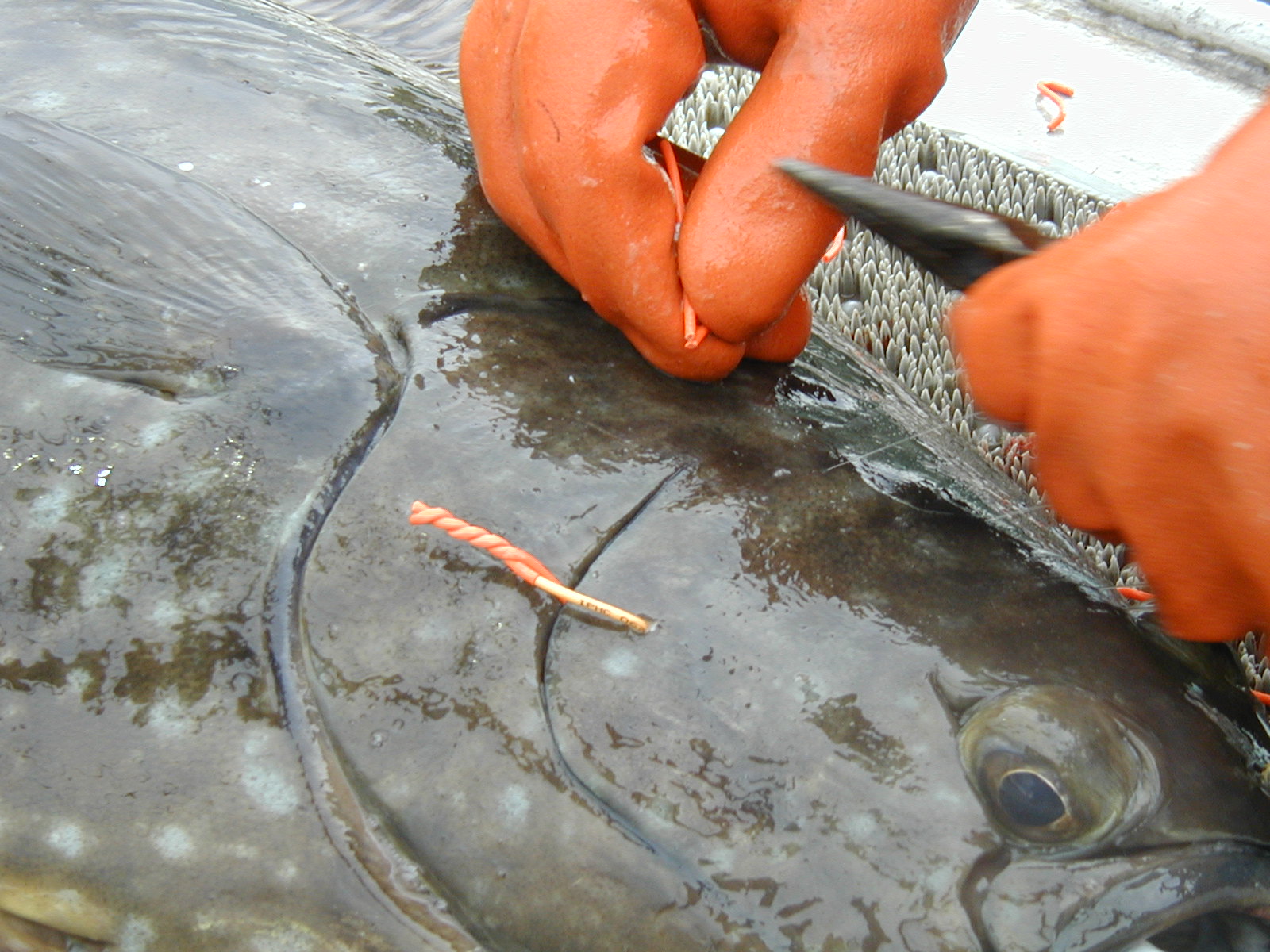 Over 230,000 Pacific halibut have been tagged with wire tags, and nearly 20,000 of those tags have been recovered. The plastic tubing covering the wire comes in a variety of colors. Most recently, the IPHC has used fluorescent yellow, hot pink, light pink, and orange. The colored plastic tubing is printed with IPHC’s contact information and a tag number and, for some experiments, a reward amount. In some cases, wire tags have been used to help test the efficacy of other kinds of tags. In these cases, wire tags were applied to the same fish as another tag type, to evaluate retention of new tag types and other factors.

Through the 1970s and 1980s, the IPHC wire-tagged a substantial portion (25-50%) of the Pacific halibut that were caught during its stock assessment surveys. However, when annual setline surveys were resumed in the late 1990s, wire-tagging was not a routine component of the survey.  In 2015, with the goal of gaining additional insight into movement and growth of young Pacific halibut (less than 32 inches [82 cm]), the IPHC began wire-tagging small Pacific halibut encountered on the National Marine Fisheries Service (NMFS) groundfish trawl surveys and, beginning in 2016, on the IPHC fishery-independent setline survey.

Colors used for this tagging effort include fluorescent yellow, light pink, and two-toned orange. In 2017, a longline discard mortality study was conducted in the western Gulf of Alaska, during which Pacific halibut released from longline gear using different hook removal methods were tagged. Recoveries from each treatment group will provide additional information on discard mortality rates by hook removal method. Given that all of these experiments have focused on fish that are below the minimum commercial size limit, these tagged fish are likely to be recovered in trawl fisheries as well as commercial longline fisheries.

“Dummy” archival tags were deployed in 2009 and 2013 to test methods of external archival tag attachment.

Because electronic tags are expensive and are relatively large when compared to wire tags, it is important to ensure that the tags will remain attached to the fish and also not negatively impact the fish’s health or marketability of the flesh. In most cases, these fish were also wire tagged to help increase the probability of recovery. Results of dummy tag experiments helped guide the attachment protocols used in later archival tag deployments (Loher and Geernaert 2010, 2014).

Passive integrated transponder (PIT) tags were used by the IPHC between 2001 and 2004.  PIT tags are about the size of a grain of rice and contain a microchip with a unique code that can be read with an electronic reader without removing the tag from the fish. Several small pilot studies using PIT tags were conducted in 2001 and 2002 to test different body sites for tag placement, including the eyed-side cheek muscle, the tongue, caudal peduncle, and behind the dorsal eye.  The final site chosen for PIT tag implantation was under the skin on the white (blind) side of the head over the opercular plate. Over 67,000 Pacific halibut were implanted with PIT tags in a coastwide study in 2003 and 2004. The tagging was followed by seven years of portside scanning of commercially landed Pacific halibut, during which over 3,000 tags were detected.  Because PIT tags were not visible in tagged fish, recoveries from the PIT experiment were not subject to reporting biases observed in studies using external marking. Results of the PIT tag study confirmed that Pacific halibut continue to migrate among regulatory areas at sizes that are harvested by the commercial longline fishery, and that assessment and management actions need to consider those movements (Kaimmer et al. 2012, Webster et al. 2013).