Chalky and Mushy flesh conditions are observed in a small proportion of Pacific halibut throughout their range. Prevalence of these conditions can vary greatly between years and location.

Chalky Pacific halibut are characterized by having flesh that has a white opaque color instead of the shiny semi-translucent appearance of normal flesh (Fig. 1). Chalky Pacific halibut have been recognized for decades, although until the 1990s the problem was mostly associated with summer fisheries in the southern fishing areas off Washington and Oregon. Until the 1990s, landings in most areas occurred during short fisheries in the early and late summer, and most product was frozen. With the onset of individual quota fisheries for Pacific halibut, which began in 1991 in British Columbia and 1995 in Alaska, Pacific halibut are landed throughout the open period, and a majority of the product is sold fresh. This, combined with an increased awareness of chalkiness by the marketplace, has created the current situation, where as much as 1% of the commercial catch coastwide is graded as chalky and thus unmarketable as a premium product, constituting a multi-milion dollar loss to the industry. 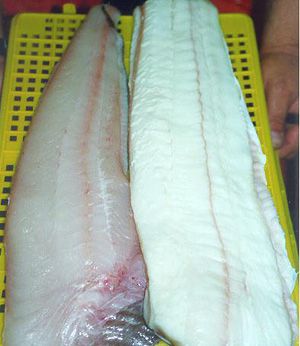 Fig. 1 A chalky fillet on the right

IPHC research, both in the 1960s and in the late 1990s, has shown chalkiness to be directly associated with a buildup of lactic acid and resulting decreased pH in post-mortem flesh. The condition is specifically associated with the denaturation of muscle proteins resulting in an increased drip loss and a sometimes startling loss of translucence in the flesh. The chalky condition can take up to seven days after death to develop, and can appear after thawing in frozen fish. In extreme cases, the flesh gapes, and has little marketability as a food product. IPHC research has associated chalkiness with two areas of the coast during late summer and early fall, and male Pacific halibut tend to be chalkier than females. It is likely that the areas with the highest rate of chalkiness are associated with high bottom temperatures (12-14 degrees C), which are near the upper thermal limit for the species distribution. As a result of IPHC studies on chalky Pacific halibut, some processors now use pH meters on 1-2 day post-mortem fish to determine flesh pH, which is predictive of the developing chalky condition.

The condition is reversible in live fish. Flesh which might otherwise turn chalky does not develop the condition post-mortem if the fish are allowed a 1-2 day resting period after capture, and before killing.

A number of documents regarding chalky fish have been produced by the IPHC which are listed below.

Mushy Pacific halibut are characterized by having large portions of flesh with an abnormally soft or jelly-like texture (“mushy”) and that can also be opaque in color. In 2011, the IPHC and the Alaska Department of Fish and Game received a number of reports of mushy halibut from recreational Pacific halibut fishers in parts of Southcentral Alaska. This is not a new phenomenon, with observations being noted as early as 1989. Analyses of flesh samples by the State of Alaska's Fish Pathology Lab in 2011 noted that fish with this condition have large areas of body tissue which are flaccid or jelly-like that is attributed to a non-infectious degenerative myopathy. The fillets may ooze water and are mushy when cooked. While the cause of the condition is unknown, it is thought to be the result of nutritional deficiencies. Microscopically, there is muscle fiber atrophy and sometimes infiltration by inflammatory cells, fibrosis, and calcification of atrophied fibers.

Kaimmer, S. M. 1998. An investigation into the occurrence and causes of the chalky condition in Pacific halibut. Int. Pac. Halibut Comm. Rep. of Assessment and Research Activities 1997: 333-337.

Kaimmer, S. M. 1999. Continuing the investigation into the occurrence and causes of the chalky condition in Pacific halibut. Int. Pac. Halibut Comm. Rep. of Assessment and Research Activities 1998: 225-228.