Understanding the reproductive biology of Pacific halibut is important for estimating the reproductive potential and spawning biomass of the stock and, consequently, for optimizing the management of the species. The Pacific halibut is generally believed to reproduce following an annual cycle with spawning typically occurring in the winter. Although there are several aspects of the reproductive biology of the Pacific halibut that are known, such as age at maturity and location of major spawning areas, there are many other aspects that have important management implications for which there is very limited or no information. For example, the mechanism(s) responsible for determining sex and, consequently, the sex ratio in the Pacific halibut population is (are) presently unknown. In addition, the process of gonadal (ovarian and testicular) development that leads to the successful production of gametes (eggs and sperm) that, in turn, results in the production of viable fertilized embryos, a key process determining the strength of a cohort, is incompletely understood.

This lack of knowledge hampers our ability to monitor and predict possible alterations in the reproductive potential and success of the Pacific halibut. For this reason, several current and upcoming research projects at the IPHC are aimed at filling in some of these knowledge gaps. One of the research projects focuses on the identification of reliable genetic markers for sex that will be used to validate specific physical markings on the fish according to sex in the commercial fleet. Other research projects are aimed at describing the full reproductive cycle of the Pacific halibut in order to improve and update current estimates of maturity status and to provide physiological markers or indicators of reproductive development or potential. 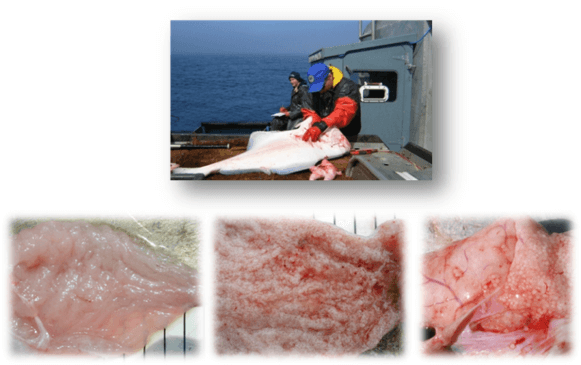