The stock status is published on the 96th Session of the IPHC Annual Meeting page.

Pacific halibut belong to a family of flatfish named Pleuronectidae. The scientific name for Pacific halibut is Hippoglossus stenolepis, a name derived from the Greek hippos (horse), glossa (tongue), steno (narrow), and lepis (scale). The name was first proposed in 1904 by Russian scientist P. J. Schmidt, who distinguished Pacific halibut from its Atlantic counterpart (Hippoglossus hippoglossus) by anatomical differences such as the shape of the scales, length of the pectoral fin, and the shape of the body. Since the identification was made, it has been debated as to whether the two are indeed separate species, although genetic work has confirmed the validity of the two different species.

Most fishes are torpedo-shaped and symmetrical, often with heavily pigmented backs and light, white bellies. Flatfish are compressed laterally and, except in the larval stages, have both eyes on one side of the head. Pacific halibut usually are dextral, that is, both eyes are on the right side. On the eyed side, pigmentation varies from olive to dark brown or black with lighter, irregular blotches that are similar to the color pattern of the ocean floor. This protective coloration makes the fish less conspicuous to predators and prey. The left or blind side is white with occasional blotching and faces the ocean bottom.

Pacific halibut are more elongate than most other flatfishes. The average width of the body is about one-third its length. The mouth is relatively large, extending to below the lower eye, and nearly symmetrical. The small, smooth scales are well buried in the skin and the lateral line has a pronounced arch above the pectoral fin. The tail or caudal fin is crescent-shaped or lunate (Fig. 1).

Reproductive output in Pacific halibut varies with sex, age, and size of the fish. Females grow more quickly, but mature more slowly than males. Most males are mature by the time they are eight years old, whereas the average age of maturity for females is about 12 years; these average ages have remained invariant despite the large decrease in size-at-age over the past 20 years. From November to March, mature Pacific halibut concentrate annually on spawning grounds along the edge of the continental shelf at depths from 600 to over 1,600 feet (~200 to > 500 m). The major spawning sites in British Columbia include Cape St. James, Langara Island (Whaleback), and Frederick Island and in Alaska include Yakutat, Cape Suckling - Yakataga (“W” grounds), Portlock Bank, and Chirikof Island. Other reported spawning locations include Goose Islands, Hecate Strait, and Rose Spit in British Columbia and Cape Ommaney, Cape Spencer, and Cape St. Elias in Alaska. Spawning concentrations also occur in the Bering Sea and Aleutian Islands. In addition to these major grounds, there is evidence that spawning is widespread and occurs in many areas, although not in as dense concentrations as those mentioned above. Evidence to support this conclusion is based on the widespread distribution of sexually mature halibut during the winter months as indicated by the IPHC’s studies using satellite tags, historical surveys, and information from commercial fishing operations.

The number of eggs produced by a female is related to its size. A 50-pound (30 kg round weight) female will produce about 500,000 eggs, whereas a female over 250 pounds (~150 kg round weight) may produce four million eggs. Pacific halibut are believed to be “batch spawners”, meaning that only a portion of a female’s eggs are hydrated at a time and released, and this process is repeated several times over the spawning season until all the eggs have been expelled. The free-floating eggs are about 0.12 inches (3 mm) in diameter when released and fertilization takes place externally. Developing ova generally are found at depths of 300 to 600 feet (~100 to 200 m), but occur as deep as 1,500 feet (~450 m). The eggs hatch after 15 to 20 days at about 5-6°C, and more rapidly in warmer water (12 to 14 days at 7-8°C). The eggs and larvae are heavier than the surface seawater and drift in deep ocean currents. As the larvae grow, their specific gravity decreases and they gradually move towards the surface and drift to shallower waters on the continental shelf. Postlarvae may be transported many hundreds, even thousands of miles by the Alaskan Stream and Alaska Coastal Current, which flow counter-clockwise in the Gulf of Alaska and westward along the Alaska Peninsula and Aleutian Islands. Some of the larvae are carried into the Bering Sea. The velocity of the currents varies depending on geographic location but typical speeds range from around 0.5 knots to over 2.5 knots (0.3-1.3 m/s).

Larvae begin life in an upright position with an eye on each side of the head. Nutrition is derived from a prominent yolk sac until it is absorbed during the early postlarval stage; then the young fish must begin feeding on small planktonic organisms. When the larvae are about an inch long (2.5 cm), an extraordinary transformation or metamorphosis occurs: the left eye migrates to the right side of the head and pigmentation on the left side fades. When the young fish are about six months old, they have the characteristic adult form and settle to the bottom in shallow inshore areas (Fig. 2). The survival of young Pacific halibut, and the varying strength of each year class, may be driven by food availability, proximity to predators, temperature or other environmental factors, or a combination of these.  Recruitment of juvenile Pacific halibut to the stock has been highly variable over the historical record, with apparently strong links to the productivity cycles of the North Pacific Ocean (i.e. the Pacific Decadal Oscillation). 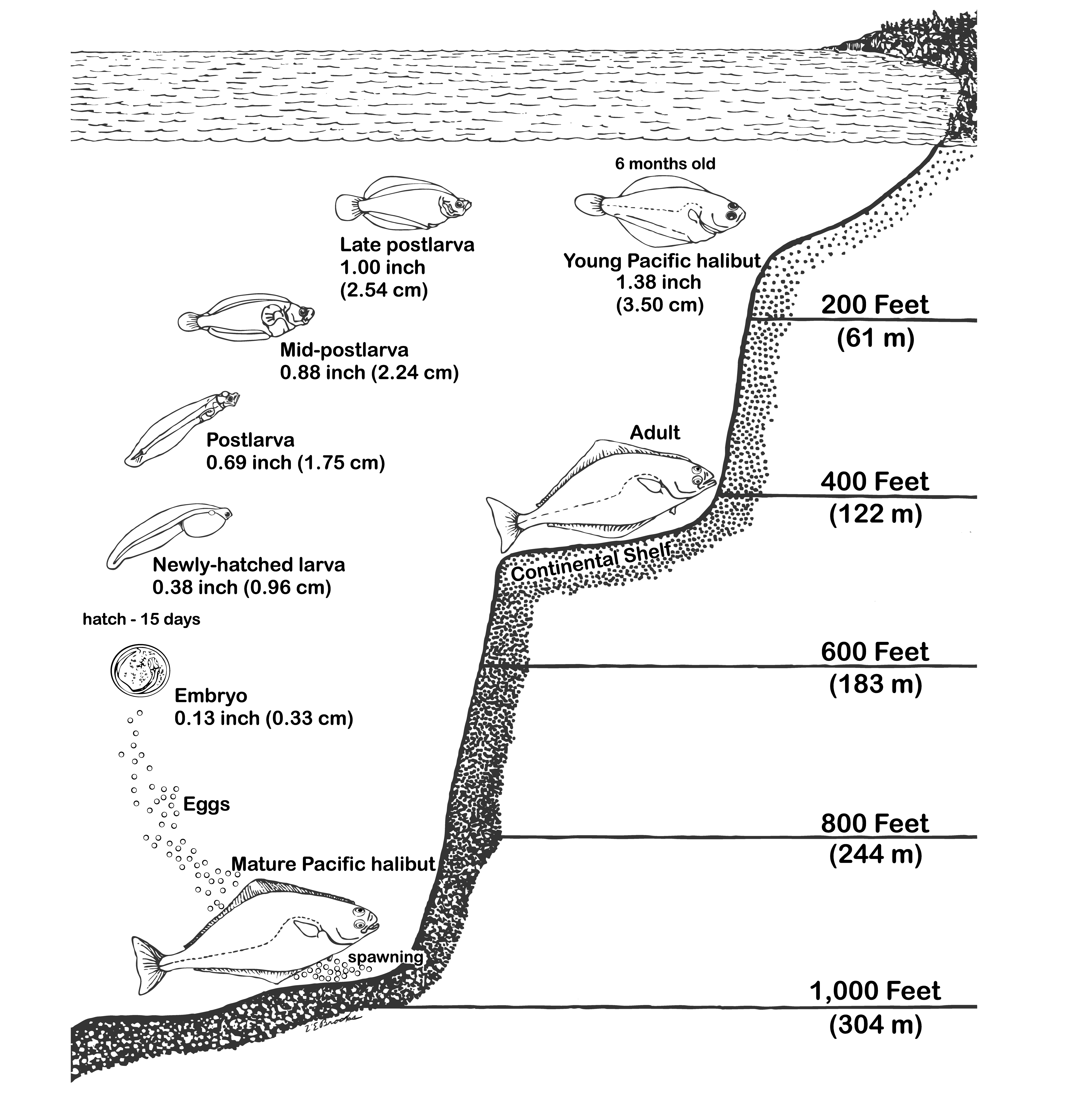 Pacific halibut are found on the continental shelf of the northern Pacific Ocean and the Bering Sea. They have been recorded on the North American coast from Santa Barbara, California to Nome, Alaska and also occur along the western Pacific Ocean coast from the Gulf of Anadyr, Russia to Hokkaido, Japan. Pacific halibut are demersal (i.e. living on or near the bottom), and are routinely found in water temperatures ranging from 35°F to 40°F (3°C to 8°C). Although Pacific halibut have been caught as deep as 4,000 feet (1,200 m), they are most often caught between 90 and 900 feet (30 and 270 m).

Countering the egg drift that occurs with counter-clockwise ocean currents, the young Pacific halibut migrate long distances in a clockwise direction. One- and two-year-old Pacific halibut are commonly found in inshore areas of central and western Alaska, with settlement areas in North America extending more broadly from at least northern British Columbia through the southeast Bering Sea, and westward into the central Aleutian Islands. Juvenile Pacific halibut tend to move further offshore at age two or three and can be found coastwide by age five or six.

By the time Pacific halibut become large enough to be caught by the commercial fishery, much of the extensive counter-migration that balances egg and larval drift has apparently taken place. However, many adult Pacific halibut continue to migrate along the continental shelf and also migrate across the shelf annually, moving to deeper depths on the slope during the winter for spawning, and returning to shallow coastal waters in the summer months for feeding.

Pacific halibut are the largest of all flatfish and are among the larger species of fish in the sea. The largest specimens in the Atlantic are over nine feet long (2.7 m) and have been reported to weigh 700 pounds (about 420 kg), although these weights have not been thoroughly documented. Several Pacific halibut weighing 500 pounds or 230 kg live weight (375 pounds or 170 kg, net weight) have been landed and documented in Alaska and Russia over the years. These fish are about eight feet long (2.4 m) and generally are over 30 years old. The oldest Pacific halibut on record are 55 years old for both males and females.

The age of Pacific halibut is determined from the otolith, a calcareous or stone-like body in each internal ear that serves as a hydrostatic or balancing structure. Each year, alternating opaque (summer) and translucent (winter) rings are deposited on the otolith. The annual growth rings, called annuli, are counted to determine the age of the fish. The IPHC collects otoliths and growth information from a number of different sources, including the commercial catch, the IPHC fishery-independent setline survey, and the National Marine Fisheries Service groundfish trawl surveys.

The feeding habits of Pacific halibut change throughout its lifetime. Larval Pacific halibut feed on zooplankton. Animals that are 1-3 years of age are usually less than 12 inches (30 cm) in length and feed on small, shrimp-like organisms, crabs, and small fish. As Pacific halibut increase in size and become stronger swimmers, fish become a more important part of their diet. The species of fish frequently observed in stomachs of large Pacific halibut include cod, sablefish, pollock, rockfish, sculpins, turbot, and other flatfish. Pacific halibut often leave the bottom to feed on pelagic fish such as sand lance and herring. Octopus, crabs, clams, and occasionally smaller Pacific halibut also contribute to their diet. Crabs with a carapace width of up to seven inches have been found in the stomachs of Pacific halibut, although adult individuals do not appear to be primary predators of crabs.